In the beginning, there is sporadic pain in the ball of the foot under the toes, extending to the instep. This can turn into a chronic problem, especially if the patient fails to treat the ailment in time. Thus, sooner or later, metatarsalgia can make every step uncomfortable. So, what are its causes and how can it be treated? We will answer these questions in the following lines.

What is metatarsalgia and what are its symptoms?

Metatarsalgia, stone bruise or Morton’s neuralgia? It's the same in all three cases. In contrast, say, to a bunion, the main sign of trouble is not the visual aspect, but the pain. The pain is felt on the bottom of the foot under the toes and in the instep and often shoots up to the third and fourth toes. Sometimes the pain is also accompanied by tingling, swelling or bruising. The pain first appears after or during exertion, but then also at rest if not treated. It is caused by friction or compression of the bone heads (metatarsals) and plantar nerves, which leads to localised inflammation.

is most often found in women between the ages of 50 and 70 because their ligamentous apparatus has a lower strength, which is biologically given, and they may also contribute to it by wearing inappropriate footwear. However, younger women and men are not immune.

First and foremost, it is too much pressure due to badly fitting footwear - especially high-heeled, narrow-toed shoes for women. These shoes squeeze the toes together and cause the metatarsals and the plantar nerve to come into contact. At the same time, the foot is not in a natural position in these shoes, with the entire weight of the body shifted to the front of the foot when walking. The state of the foot arches also plays a role in the severity of metatarsalgia. As a rule, metatarsalgia goes hand in hand with collapsed arches and flat feet, which are also caused, among other things, by overloading the feet (due to inappropriate footwear, excess weight, etc.).

Other causes may include bony outgrowths or an unnatural gait in post-traumatic conditions, such as tiptoeing after a knee injury when the leg is fixed with a brace.

How can you tell if it really is metatarsalgia?

It isn’t visible. We recommend that you see a doctor, who will most likely send you for an X-ray. Not everything can be determined from X-rays, so an ultrasound or MRI may be called for. 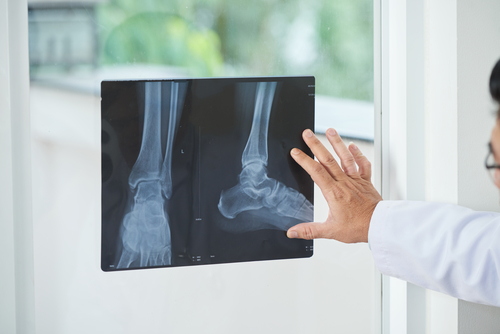 In order to begin treatment, it is first necessary to uncover the cause of the ailment, so that once it has been treated, a relapse does not occur. The subsequent treatment also depends on the severity of the ailment. Surgery is only necessary in severe cases, where the site is cleaned and the damaged nerve is removed if necessary.

In other cases, conservative treatment is preferred. Examples of this include the use of physiotherapy, where special exercises are performed to improve muscle coordination and relax soft tissues. It is also possible to use Kinesio taping or shock wave therapy. A great aid in treating metatarsalgia and as prevention is to wear foot alignment socks. Thanks to the special toe separators, they help to increase blood circulation and thus speed up foot regeneration. Foot alignment socks keep the feet and toes mobile and flexible, so that they are less susceptible to pain.